Ten years. Ten years is how long it has been since the Marvel Cinematic Universe, or the MCU, was kicked off with Iron Man. Each and every movie that was created since then has been leading to this moment, Marvel: Infinity Wars.

Before we get into that, let’s talk about the MCU. The MCU is divided into phases, and each phase contains several movies. Currently, the MCU is halfway through phase 3, but without context that doesn’t make much sense, so the graph below will shed some light on it.

Marvel is actually quite genius for separating the movies into phases, because each phase is a domino in the chain of events. As I see it, Phase 1 is the starter of it all. It introduces the base characters of the Avengers and then passes the baton to Phase 2, which expands on the existing characters and introduces new ones. Phase 2 also introduces the Infinity Stones. The Infinity Stones are six individual gems, each holding power beyond comprehension. In the movies, it’s said that these stones are from six cosmic entities from before the creation of the universe. When the Big Bang occurred, they transformed into gems, their powers condensed into the size of a large pebble. For obvious reasons, these gems were spread across the universe, so no person can control all six. However, as also hinted in Phase 2, Thanos, a space warlord, is on a quest to get all 6 and control them. In Infinity War, or the Unnamed Avengers Movie, he will. Here’s some visual aid to understand: 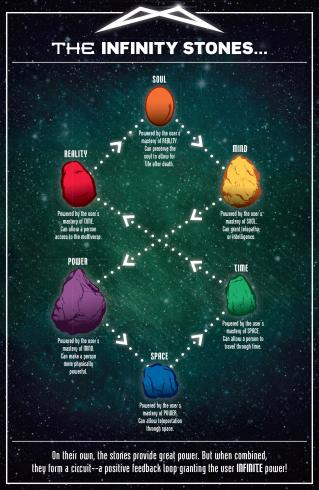 So that leads us to Phase 3, where everything starts kicking into high gear. To kick off the start of Phase 3, there’s Captain America: Civil War, which basically puts a wedge between the Avengers and splits them in two. Iron Man versus Captain America basically, each with their own respective teams that will be seen in Avengers: Infinity War. Phase 3 puts the stones into context and introduces new characters, such as beloved Spider-Man, Dr. Strange, Black Panther, and a few more. We can’t forget the entire reason for this article, Avengers: Infinity War.

A whole lot of stuff is going to hit the fan in this movie. Thanos will make his big debut coming to Earth in search of the infinity stones. I can only guess from the trailer that Thanos runs into Thor and Loki on his way there, where he is gifted the Space Stone by Loki for one reason or another. However, it is speculated that Loki gives it in exchange for Thor’s life.

The other three infinity stones shown in the trailers are the Power Stone, the Time Stone, and the Mind Stone. Now, the Mind Stone currently resides in Vision, an android created by Thor, Iron Man, and Bruce Banner. In the trailer, we see one of Thanos’ lackies stabbing Vision’s head to remove the stone, which I presume means Vision’s death. The Power Stone, however, was being held on a whole separate world, Xandar (Zan-dar). Although it is unknown how the Power Stone came into his possession, I’m guessing he laid siege on that planet until he had it. Dr. Stephen Strange holds the Time Stone within his Eye of Agamotto, a “magic” necklace that grants the user power over time.

Now the for the remaining stones that weren’t included in the trailer, the Soul Stone and the Reality Stone. The Reality Stone is with the Collector, an interstellar amasser of a large variety of items, and it’s unknown how Thanos will come into contact with it. The Soul Stone is the odd one. In all 18 movies, it hasn’t been mentioned once, and its whereabouts are still a mystery. Ever since the release of the first trailer, fans have been guessing where it could be kept, but Marvel has confirmed nothing, so we will have to wait to find out.

It’s been confirmed by the directors of Infinity War that some very large characters will die in this movie, which I have mixed feelings about. I want at least a few of the characters to die so that the buildup to the movie falls short, but a lot of fans, myself included, are going to be devastated when one of the big hitters like Captain America or Iron Man die. With a presumably billion-dollar budget, I’m expecting the two parts of the Infinity War movie to be the best movies ever made. Tickets are on sale now, and I suggest getting some before they sell out.