This isn’t the first time I’ve said it, and it certainly won’t be the last:

I hate the Kardashians.

I never feel dumber than I do when watching clips on Instagram from Keeping up with the Kardashians.  The entire show closely resembles kids playing with Barbie dolls, posing them in different places and making them talk to each other.  You’re better off huffing glue than watching the Kardashians—I’m sure it kills less brain cells.

Because I’m petty and extra, I’m going to break it down for you.  We’ll be looking at three members of the Kardashian-Jenner family, mainly because the others are even less interesting if you can believe that.  If you can’t keep up with me, you’ve probably been too focused on keeping up with the Kardashians.  And if you don’t agree with me by the end…you’re wrong.

Pop quiz time!  Which of the following has Kim Kardashian done?

Trick question!  All of the answers are correct.

Kim Kardashian is the undisputed star of the Kardashian family.  Although Bruce Jenner and Robert Kardashian had been famous before the 2000s, Kim created a new type of fame for the rest of the family through her relationship with Ray J in 2007.  Once known merely as Paris Hilton’s best friend (and employee), she became a celebrity in her own right.  But since Kim’s “career” exploded in 2007, she’s done some questionable things, most in the public eye.

One of Kim’s biggest—but certainly not only—problems is that she embraces black culture but constantly disrespects black people.  She once wore Fulani braids (which she shouldn’t do in the first place as a white woman) and called them “Bo Derek” braids on her Instagram.  Bo Derek was a white woman and certainly not the originator of the hairstyle, but Kim didn’t seem to think that mattered.  And that’s not the first, or only, time she’s styled her hair in a way that is disrespectful to African Americans.  She’s gone with cornrows and boxer braids, and media sources have actually erroneously credited her with popularizing the styles.  Instead of using her platform to correct these assumptions and give the credit to the black women who deserve it, Kim did what she does best: nothing.

Let’s also not forget that she’s been accused of blackface and defended the actions of a man who said he wanted to throw battery acid on a black woman to make her foundation match her skin tone.

There’s an old Armenian proverb that says, “The Devil works hard, but Kris Jenner works harder.”  And it’s true.  Kris is the matriarch of the Kardashian clan.  She turned the release of her child’s inappropriate recordings into a billion-dollar industry and never misses an opportunity to make more cash.  But being a corporate mastermind means that the part of her soul that should contain humanity is instead a display case of Kylie Cosmetics™ Lip Kits.

All the proof you’ll ever need is right here in this photo taken of Kris Jenner and esteemed chef Gordon Ramsay:

On the right is a photo posted by Ramsay.  On the left is a similar photo that Kris posted.  The two have some slight differences.  In the picture on the left, Kris’ head is at a slightly different angle.  There’s no glare on the cookbook.  You can see her nail polish better.  And she also used Facetune to make Gordon Ramsay look like a sleepy, hardboiled egg.  That’s just not something a sane woman does.

Kylie has become a role model and beauty icon for insecure teenagers and confused twenty-something year-olds all over the country.  But Kylie, like her sisters, is pretty much the worst.  Here’s why:

Last year, she was accused of stealing designs from Plugged NYC, an independent, black-owned fashion brand.  And it wasn’t just a conspiracy; Tizita Balemlay, the creative director for Plugged, has the emails to prove it.  Her receipts show that Kylie asked Balemlay to gift her some pieces from the brand, particularly the camouflage two-piece sets.  However, when Kylie published new pieces to The Kylie Shop online, Balemlay was shocked to find that she’d copied Plugged designs almost exactly, right down to the shoes.  While Plugged is not the origin of the popularization of camouflage, she did bring back the use of the pattern in two piece sets.

It’s not the only example of Kylie stealing from black people and their culture.  She and her sister, Kendall Jenner, have received a lot of backlash over an addition to their clothing line, Kendall + Kylie.  The line showcased t-shirts featuring pictures of the sisters and their initials, which were superimposed over images of rap and rock artists like Notorious B.I.G. “Biggie,” Metallica, Pink Floyd, and Tupac.  People were not happy, saying that the shirts were insensitive, especially since Tupac and Biggie have been dead for many years now.  Biggie’s mother, Voletta Wallace, expressed her feelings about the shirts in an Instagram post:

“I am not sure who told @kyliejenner and @kendalljenner that they had the right to do this,” Wallace said.  “The disrespect of these girls to not even reach out to me or anyone connected to the estate baffles me.  I have no idea why they feel they can exploit the deaths of 2pac and my Son Christopher to sell a t-shirt.  This is disrespectful, disgusting, and exploitation at its worst!!!”

In the past few years, Kylie has come under fire for wearing dreads, cornrows, and bindis to name a few.  Amanda Stenberg summed it up best in a comment left on one of Kylie’s appropriative Instagram posts: “When u appropriate black features and culture but fail to use ur position of power to help black Americans by directing attention towards ur wigs instead of police brutality or racism.”

On a less political note, take a look at this picture:

This one is just sad.  Kylie is famous for her distinctive makeup look, but some of y’all are really out here worshipping her when she can’t even perform the most basic function of makeup.  Pick the right shade.  I hardly ever wear makeup, but even I would know never to leave the house like this.  What makes a person purchase this shade?  Kylie is a millionaire.  She can afford to buy the right color foundation.  It makes her hand look like a piece of undercooked chicken by comparison.  This is just embarrassing. 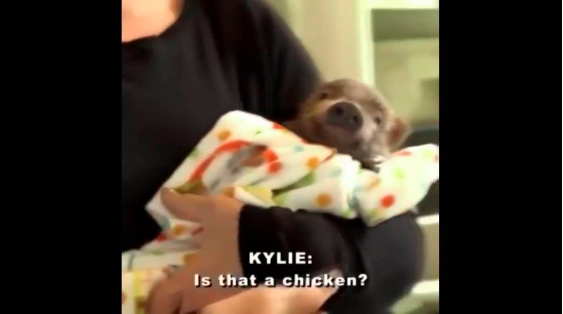