America is the home of immigrants and multiple races. But ironically, the majority in our country have grown to adopt bias and bigotry as a norm. They have grown to notice the differences and “weird” aspects of various cultures and fail to see similarities. Now, Muslim people and Syrian refugees, are seen with the blinding label of terrorist. A terrifying majority of American people don’t want them here. It’s not even like there are only a few people campaigning and complaining about Muslims being terrorists, it’s almost everyone. These campaigns that start out small catch the eye of innocent bystanders and suck them into a fight in which they’re ignorant of what they’re actually fighting. When the truth is that, if they actually met some of these so-called “terrorists,” they would be blown away.

I met some people that quickly threw away the misconception of Muslims. I met some of the most beautiful people the world has to offer. I was given the pleasure to interview a beautiful Syrian family of three by way of World Relief, and I couldn’t help but notice how their gratitude flowed in abundance, yet they had endured much more suffering than we could ever imagine.

“It was all for my niece,” Lamis said. Lamis fled Syria along with her sister, Lama, and her sister’s daughter, Aya. Aya has a unique blood disease called Faconi Anemia and she desperately needed a blood transfusion. But the situation in Syria hindered them from being able to get the medical attention that was needed. “The hospitals were out of reach, because of the curfew at night. We couldn’t just hop in the car and go to the hospital anytime we needed… [the last night in Syria] was the worst night of my existence. Aya was bleeding the whole night and we couldn’t get help, and that was the tipping point for us. We weren’t living a normal life. After 5 o’clock in the evening we couldn’t move around. So that night we decided that no more could we live like this.”

That was in 2013. After they finally got help for Aya at the hospital the next morning, they fled to Turkey and lived there for the next three years. Lama has a degree in teaching music, and Lamis had just graduated with a degree in architecture. In Turkey, Lama worked her way from beginning as a yard supervisor in a Syrian school, all the way to being vice principal. Aya went to another Syrian school and Lamis worked as a freelance designer for a company and also as an English translator. They all made friends very quickly and mentioned that the thing they miss the most about Turkey, was the friendships they made there.

The thing that impressed me most about this family was not the fact that they have been able to continue living despite the dehumanizing situations in Syria or that they were willing to leave everything just to get the medical help needed for Aya, but it was how they still wanted to give back to society when it had already taken so much from them. They were all so hopeful, kind, and thankful, and they had lost almost everything. When asked what message she would want to give to the people reading her story, Lamis replied with: “I want to just thank the people here. I’ve never met so many nice, kind people. Everyone is just so helpful, welcoming, understanding. So I want to thank them, and thank the American government for this opportunity for me, for my sister, for my niece, especially for my niece because it’s all for her. That’s why we moved here. And we are so grateful, you have no idea. We will try our best to fit in and work and be productive in this society and give back to this society just as much as they have given to us; we will try to pay them back with our gratitude. The American nation has taken in refugees and migrants from all over the world and taking in Syrian refugees makes sense because they need the help the most.”

Lamis’ words amazed me. She could’ve complained and griped about her family’s situation– how hard it was to move to a completely new country and how restricted they felt in Syria. Because of the curfew, they couldn’t do anything after 5 o’clock in the evening, and we complain about our Wi-Fi being slow. Not only did she personally thank the American government and the American people for accepting them, but she did so with very advanced English which she first learned in middle school when she “just fell in love with the language.” After that, she taught herself more English by watching American TV shows and movies, just for fun — TV shows like The Office, and Parks and Recreation. She loves actors like Chris Pratt and Steve Carell. So, tell me: How different is she from you?

Lama is a music teacher and, of all instruments, plays the accordion. Occasionally, she likes to play at midnight and wake up her entire house. Aya loves ballet and wants to visit Los Angeles because she aspires to be an actress. How are their ambitions any different than yours? Do you not also want to make a contribution to society by doing the the things you enjoy? They’ve most likely seen and experienced more trauma than you ever will, and they want to give back to and be a part of society while you would rather sit on your bed and watch Netflix. These people have so many fascinating stories, wonderful talents, interests, and beautiful souls; they could bring so much diversity and improvement to our society if we just let them. So, why is it again that the majority of Americans don’t want to accept these beautiful Syrian refugees? 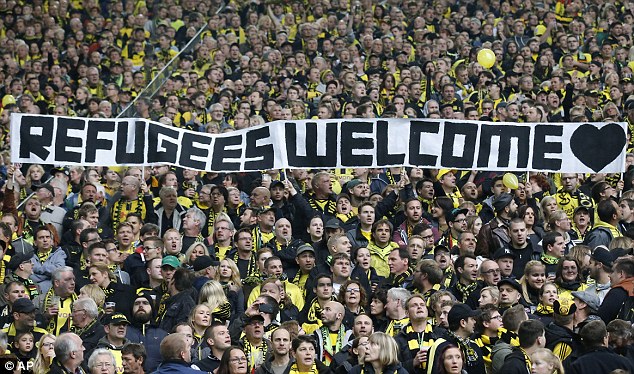