My freshman year, International Club consisted of a handful of freshmen; we were hopeful and eager to make our mark on Heritage. Club meetings then consisted of powerpoints made my different club members about various countries. The real work started when we were told by our advisor Mrs.Tucker that we had to put on an international showcase in the spring. We were terrified; none of us had any real experience, and our club members were so few we didn’t think it could work. The International Showcase that year succeeded because of our dedication and help from Knightdale High School and their International Club.

Years since then, Heritage’s International Club has grown to unprecedented levels. Our club size has doubled, and our influence has as well. The past 3 International Showcases have been bigger than anything I ever thought was possible. The show can now boast of showcasing a wealth of cultures, as well as drawing audiences outside Heritage’s walls. We’ve had performances from multiple clubs at Heritage, including African Student Association, Asian Culture Association, Color Guard, as well as outside performances from NC State and the Athenian Owls.

Though this years’ show was amazing, it was sad for some; for many of the club members, this years’ show was their last show. To recognize this, the recent show ended with a farewell address to the graduating seniors that had participated in the show. It’s a beautiful thing to watch something you had a part, grow into something bigger than you ever expected; and as we all move on, I’m excited to find out about the impact that we will continue to have.

As I leave, I have high expectations for the future of this club. The success of the show itself is sure to bring in more and more members who are just as eager to make a mark as we were our freshman year, and with the added knowledge of the other members, these members can continue to promote our motto throughout the school and community. 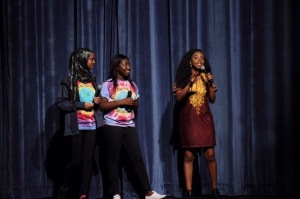